The work that I had done in preparation to the workshop was primarily finding the structure of the piece. In the past I have been resistant to the idea of writing scripts or producing story-boards, not because I think they are not important, but because they felt foreign as a form of putting the ideas for my work into a framework in which they can be produced under some structure. Now that I am working with data on my dissertation, I’ve been investigating the idea of using data visualization as a form of a “notation” system, or “visual score” for a time based piece.

This research lead me to a few filmmakers that have used personal forms of notations to structure their animated films. Probably the most rigorous in such approach was Norman Mclaren. To have a closer look into how McLaren and others used their notations, I’ve decided to build a website in which one can interactively explore the notations in comparison with the film. The basic principle is to be able to watch the film and the notation in parallel to each other. This allows us to see how a particular moment of the film is abstracted in the notations. This has given me great insight into the creative process of these artists and even further appreciation for the possibility of articulating film ideas in visual scores.

Now, the way I am appropriating this idea is that I am visualizing my data and looking at it as a score, which takes me a few steps closer to how I want to represent my data. This process is something like this:

– Chaos: I have the idea of working with something related to my father’s passing and my reaction to it.

– First abstraction: I decided to use the only surviving document I have of my father. Something I knew will have great emotional impact on me because the content (mostly related to his time in prison and what led to his death). I have stayed away from it for a long time and when I decided to read it for the first time I recorded my heart-beat data. This gave me a long document of “numbers” which by itself have very little meaning.

– Second abstraction: Then I visualized this data in the following form. (Scroll right and left to explore the data, click on any point to see how the pulse changes when the pulse is high or low).

Now this “score” becomes my framework to think about the animation. The visualization by itself has something appealing about it, but I am interested in further bringing myself into interpreting this emotional landscape. This happens in the process of drawing and animating based on this structure.

One of the ideas I developed during the workshop was the following:

There are two values in the data: the BPM (beats per minute) and the TBB (time between beat, in milliseconds). Which means I have a scale in the BPM and I can precisely know how many frames there are between each beat. In the following image, the values playing at a particular point of the notation are shown in the console. 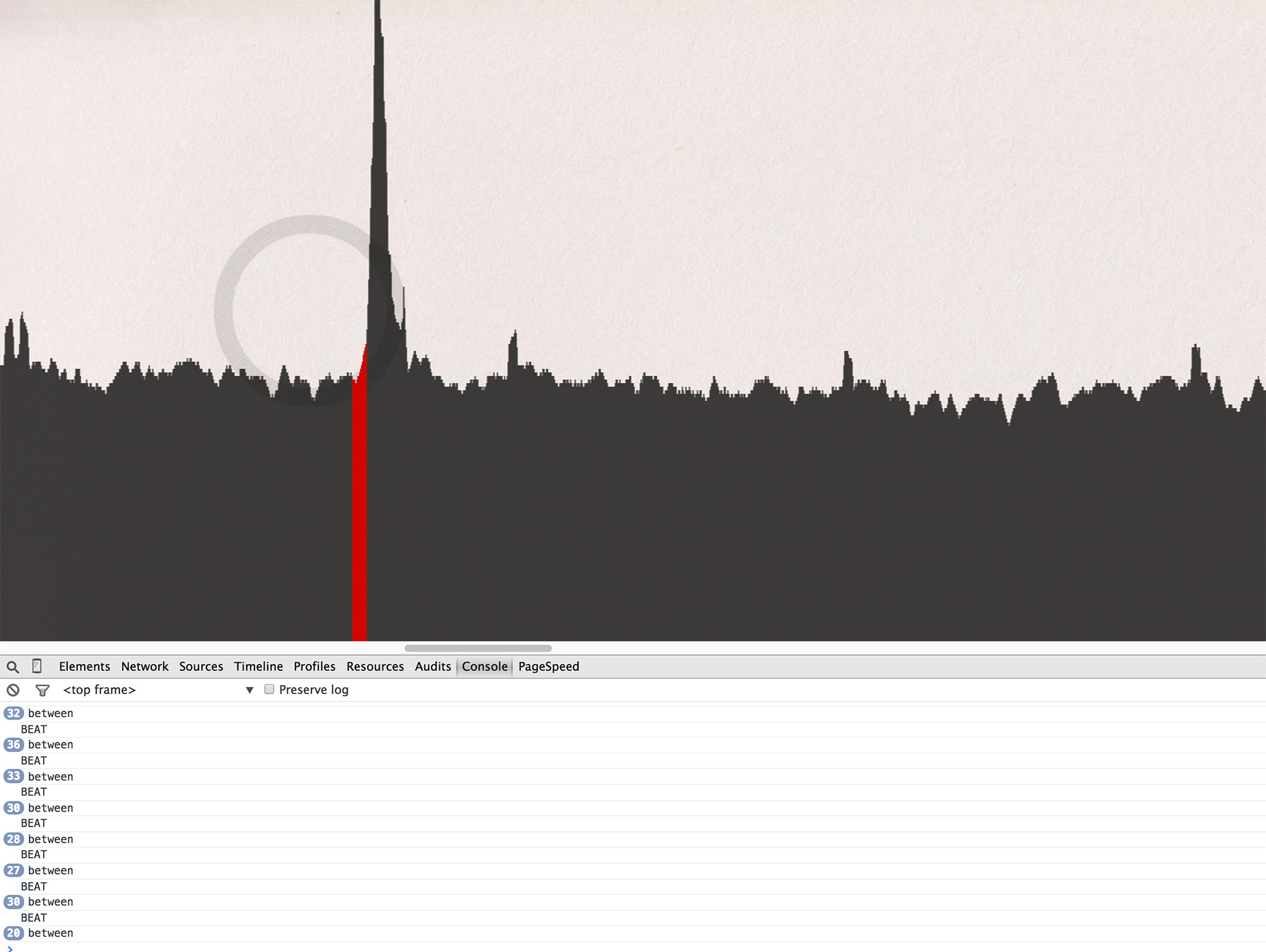 This is playing at 60fps and I realized that there are enough frames between each beat to produce a clear image in animation. Short but visually clear. This lead to the following graph in which I started thinking about the possibility of “allowing” the data to edit the animation as it develops. The idea is that there is an image of a man falling into the floor (more about this in the next post), and instances of short memories either as intercut or some form of editing. Every time there is a beat, there will be an image of a memory and between each beat we would see the man falling into the ground in slow motion. As the graph below shows, when the rate is low, we see more of the man falling and when the rate is high we see more of the memories rapidly coming closer together.

I realized then what I was trying to accomplish with this piece. Postponing death, delaying the inevitable, bringing back to life (with my heart) that which is gone already. As if each beat was the chance to relive the past with the imminent risk that the next beat won’t come.

My co-supervisor Marsha Kinder always talks about the idea of narrative as an obituary proposed by Peter Brooks in “Reading for the Plot”. I feel now I am quite literally embracing this idea in my work. Kinder explains:

Brooks’s theory claims all narratives are rooted in autobiography, for all stories are obituaries designed to forestall a premature death. We all know our lives will end in death, but don’t know when or how. Thus, it’s no accident that many of the greatest narratives are modular, digressive or long—like Scheherazade spinning new modular tales to keep her husband from killing her, or Tristram Shandy flagrantly digressing to postpone key events in his life (including his birth and death), or Marcel Proust mining his expansive database of memories.

They all focus on what Brooks calls the expanding middle, that force field of desire.

Here’s how he puts it: “Our lives are ceaselessly intertwined with narrative, with the stories that we tell and hear told, those we dream or imagine or would like to tell, all of which are reworked in that story of our own lives that we narrate to ourselves in an episodic, sometimes semi-conscious, but virtually uninterrupted monologue.” – READING FOR THE PLOT [1]

[1] Kinder, M. (2013). From Playing with Power to Interacting with Autism: Developmental Tales of Transformers and Neurodiversity. Unpublished paper presented at the University of California at Santa Barbara, Nov. 15, 2013.

It makes complete sense that the pulse would provide the foundation for an autobiographical narrative and as a structure for organization. The heartbeat is the perfect time continuum for driving the animation and the narrative forward. There is a long history of precedents in time-based, notational experiments by both composers and filmmakers. Alexander Scriabin, for example composed his Prometheus: Poem of Fire, incorporated a color organ that projected a corresponding light show in sync with the music. There is a part in the score specifically for the organ. Other composers come to mind such as John Cage, Karlheinz Stockhausen, Edgard Varese, George Crumb, and Earle Brown who all experimented with unconventional graphical notation. In the early days of electronic music, composers felt that traditional notation didn’t really convey the textures and timbres in the music. Also, the filmmaker Sergei Eisenstein wrote a book called The Film Sense (you probably know it), in which he notated sections of Aleksander Nevsky in a way very similar to what you are describing in this post. He essentially related Prokofiev’s score notationally to camera angles, the dramatic arch, etc. Definitely worth looking into. But I think the precedents in musical notation provide an interesting basis for your research and I can certainly help you with that.
Reply
Randall I've been studying the musical notations you mention (not all of them, I'm going to look up some of the names I don't know) and there is definitely a rich tradition of this in music. In film and animation has happened to a lesser extent. The reference to Eisenstein diagrams is very helpful, thank you very much. It was not on my radar and is an important example to incorporate into the series of case studies I am doing. I'll pick your brain more about the notations, I suspect you can help me find some rare gems.
Reply